Starting tomorrow Apple will start enforcing a new rule limiting the length of an app’s name to 50 characters. Additionally, they will start disallowing apps from including “terms or descriptions that are not the name of the app”.

The latter of these rules is probably the most actually impactful and important in terms of cleaning up the App Store. As the length of the names hasn’t really been the problem, it is keyword spamming at the end of the name.

But the 50 character limit is still interesting to consider, so I dug through my App Store metadata cache to see just how many apps would be affected. It looks like only around 9% of apps currently have names that are longer than 50 characters (around 200k). The distribution of all app name lengths looks like this: 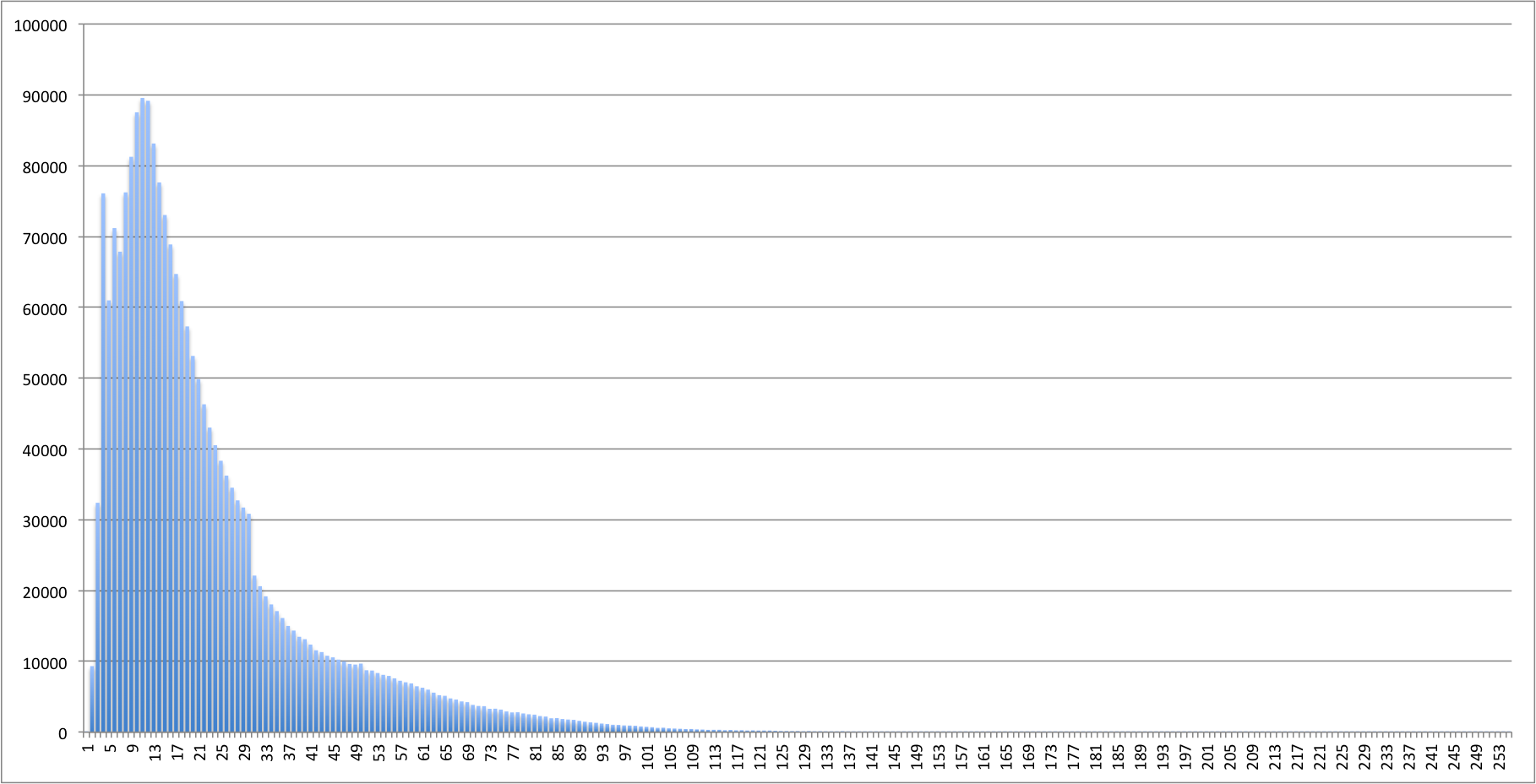 You can clearly see that the vast majority of app names are clustered around 10-15 characters long, with a steep drop off to the absurdly long ones.

The average length of an app name is 22 characters. The mode is 11. The median is 17. Which tells me that the 50 character limit was added largely to constrain the problem rather than address it directly.. The vast majority of apps are short enough to be unaffected by the limit.

In case you are wondering, the longest an app name can currently be is 255 characters. There are around 44 apps with that length including “Super Flappy-blade-lord-new-baby-cheats-fall-plus-jump-cooking-fly-bird-shooter-mania-all-tap-top-cool-new-shooter-riff-all-in-space-cycle-pal-all-in-one-fm-messenger-epic-head-you-epic-guess-hero-run-hero-top-fun-girl-me-crazy-my-in-uber-flinch-net-fix-4” which is quite a feat in-and-of itself. I pulled all 44 of the 255 length names into a text file if you want to browse them.

I will be very curious to see how strictly the policy against adding additional terms to the name will be enforced. Will creatively descriptive names be allowed? Would something like “The Ultimate Platform Running and Jumping Adventure” be permitted? Is just moving the keyword adjectives forward to be part of the name rather than as a suffix going to be acceptable?

At the very least I suspect the trend of adding a dash/colon to the end of your app’s name and then appending a subtitle will be strictly forbidden. Roughly 500k apps (23%) include a dash or colon in their name so that will catch out a more sizable number than the 50 character limit.

I also got started wondering if the new limit would have a negative affect on any ‘legitimate’ names. So I lost more time than I’d like to admit on this Wikipedia page about the longest English words. The longest word in a major dictionary “Pneumonoultramicroscopicsilicovolcanoconiosis” is only 45 characters long so if someone were to make an app specific to this lung disease they’d be fine. If Disney wanted to make a ‘Supercalifragilisticexpialidocious’ (34 characters) app they too would be fine.

Things would only start to get tricky for long place names. If the local hiking club of “Tau­mata­whaka­tangi­hanga­koau­auota­matea­pokai­when­uaki­tana­tahu” (a hill in New Zealand) wanted to make an app they’d be out of luck with a name 35 characters over the limit. But in practice I don’t expect the 50 character limit to be a problem outside of these more novelty cases.