Yesterday Apple announced the fall lineup of new hardware, including the iPhone 6s/6s Plus. Overall the announcements were pretty solid, with one bright, glaring exception…the base model iPhone starting at 16GB. This detail makes me both sad and a bit concerned about what it indicates about Apple’s priorities.

This sticking point is by no means novel or new, but I thought I could add two useful aspects to the discussion. First a personal anecdote and then some data from my own apps showing the magnitude of the problem.

While I am typically in the ‘friends don’t let friends buy 16GB’ club, for the last year my wife has used a 16GB iPhone 6+ as her primary phone. I had initially purchased the phone as a testing device that would spend most of its life in a drawer on my desk so didn’t opt for any extra storage. Soon after it arrived she decided she wanted to try out the bigger screen size and quite liked it. So while I’d usually not have bought one, this situation allows me to see what a 16GB device is like in typical use.

One of the most significant roles my wife’s iPhone plays in our lives is as the primary camera that records my children growing up. While we have a nicer camera for more special occasions, her phone is always with her and so captures the vast majority of candid moments. Based on Apple’s marketing I’m pretty sure we aren’t alone in this.

This past weekend my family went on a camping trip out to Shenandoah National Park. This was the first big camping trip we have taken as a family. While out on a hike, my wife grabbed her iPhone to capture me and my kids looking out from the mountain we had just proudly hiked. She was greeted with this: 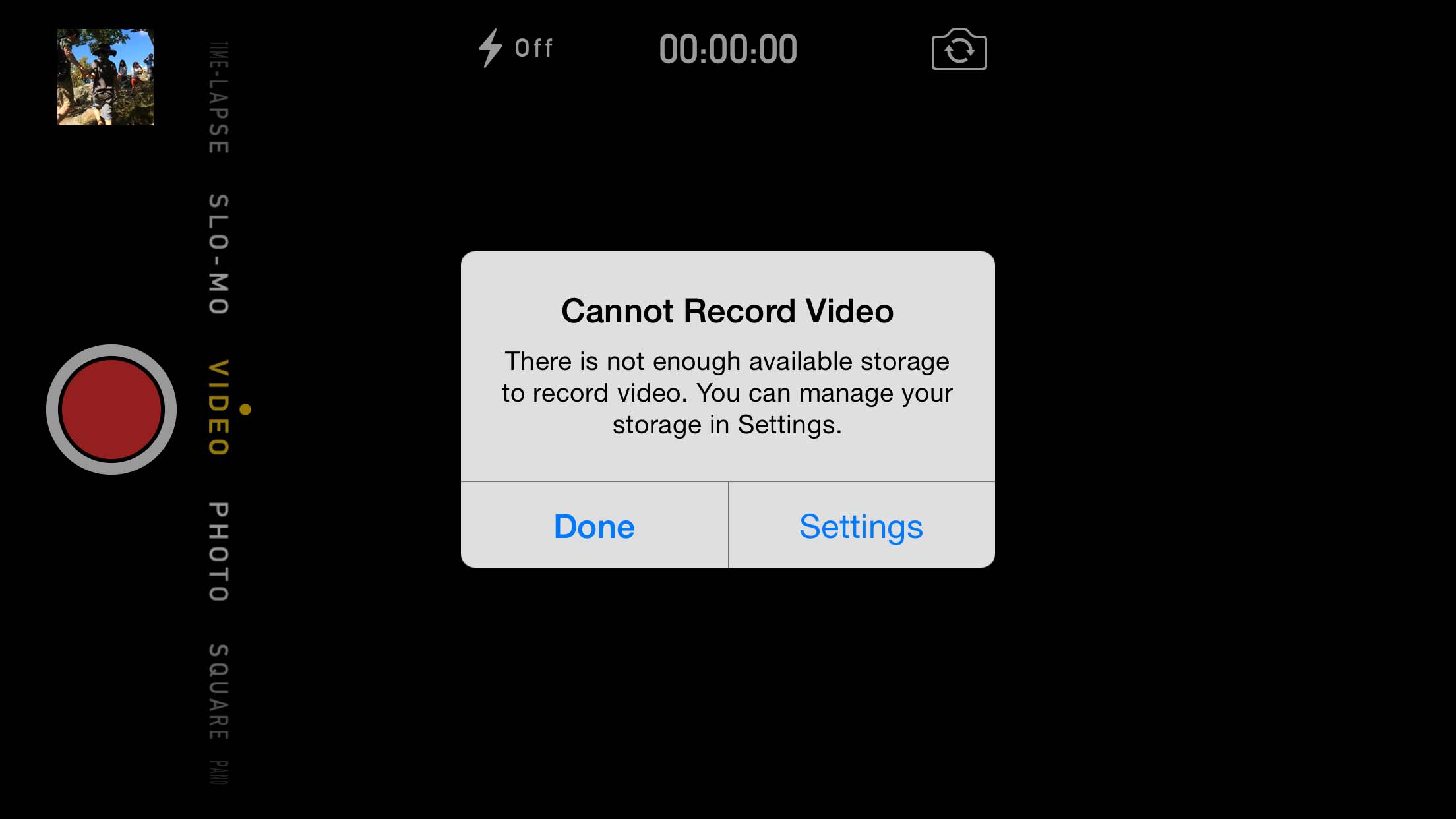 The moment was forever missed.

This isn’t the first time this has happened to her. Despite my best efforts to keep her storage in check (and all the cloud services that are supposed to help turned on), under typical use her phone will just eventually fill up. This experience isn’t just bad in that it misses that moment. When your phone hits zero space the device becomes horribly unresponsive, making the process of freeing up space cumbersome and time consuming.

The iPhone’s role as primary historian of our lives is a pretty solemn obligation. Which may sound a bit overwrought but it is the reality. So when it fails to fulfill that role it is a pretty serious and personal.

For a long time I’ve used the usage data from my Audiobooks app as a indication of what typical iOS usage looks like. It is an old enough app with a wide enough userbase that its data has generally been pretty reflective of what I see reported overall. So while not perfect they should give a good general idea of what customer choices.

Using that as a dataset I took a look at which new iPhones customers have been purchasing over the last year. 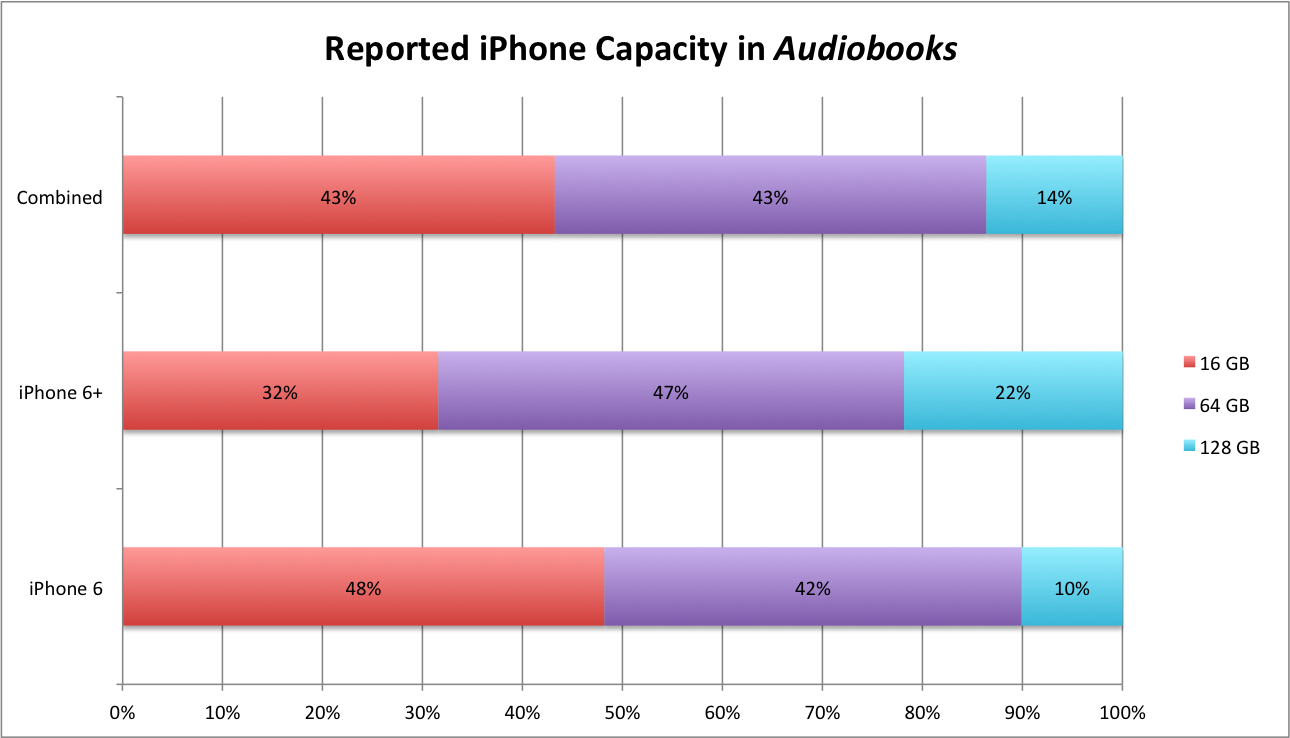 So among iPhone 6/6+ customers around 43% opted to purchase the cheapest, 16GB model. That a higher proportion of 6+ users went more upmarket is interesting, though intuitively makes some sense to me. Since the 6+ starts $100 higher than the iPhone 6, they appear less driven purely by price.

43% of customers at the scale of the iPhone’s sales volume is a lot of people.

Then I took a look at how much free space was reported for people with 16GB and 64GB devices.

So amongst customers with 16GB devices 37% of them have less than 1GB of space available, compared to just 1% with 64GB.

Looking at that in a bit more detail things look pretty rough at the low end.

I’d say it is pretty fair to say that if you have less than 1GB of data available on your iPhone you are in imminent danger of running out and ruining your day. Taking the 43% of customers with these devices and the 37% of them who fall in that range we have 17% of customers walking around each day with a damoclean sword dangling over their heads.

What worries me more than anything about this situation is that it is a deliberate choice. When bugs emerge in software or defects surface in hardware they are the unintentional result of mistakes made during the creation of a product. While not desirable, they are much easier to excuse as the inevitable side effect of the process of creation.

The storage capacities of iPhones aren’t a side effect, they are a choice. I cannot begin to imagine the amount of discussion, research and thought that Apple has put into the capacities of their headline product. I’m sure bumping up the base model to 32GB would cost the company more and so by holding the line at 16GB for another year they will increase their profits. This near term benefit will surely help their balance sheet in their next earnings call but comes at the cost of the day-to-day experience of some of their customers.

In the end Apple has decided to continue offering a product that will almost inevitably fail their customer at some point, and potentially fail them at a moment of deep personal importance. That makes me sad, and as someone who makes my living riding their coattails, worried about the long term effects of this short term thinking. Maybe it is just sentimentality but those aren’t the priorities that I think Apple stands for.