It is no secret that the vast majority of revenues being made today in the App Store are via consumable based “Free”-to-Play games. These have sat atop the Top Grossing charts for a long time now. Last month at WWDC Apple announced that it had paid out $5 billion in the last year to developers, with clearly much of this going to these types of apps. As someone who makes their living in the App Store (much of it via In-App Purchase) I worry about this trend.

It isn’t that there is something intrinsically wrong with the consumable In-App Purchase model. I’m sure there are instances where it is the appropriate way to monetize an app. I am, however, concerned about the way that it is increasingly being applied. Whenever I read articles like this detailing the various psychological and coercive tactics app designers are using it makes me nervous. There seems to be a culture developing around designing games and apps that are intended to intentionally mislead and coerce customers into making more and more purchases.

In my first draft of this article I found that my complaints started to get too into the moralistic questions regarding this style of commerce. I realize, however, that my views on the virtues of this may not be universal. So instead I’m going to focus on hopefully more universally agreeable concerns with the rise of consumable In-App Purchases.

My most basic concern with this revenue model (and how it is currently being applied) is how it can become dishonest and intentionally misleading to customers. I don’t think anyone would contend that making a customer feel cheated or regretful of their purchases would be a good thing. The nature of many of the techniques currently employed is to create environments where customers make impulse decisions in the moment that they would not make with more context.

While individual customers have a responsibility for their own actions, the App Store has always put borders around what developers can do with the overall well-being of the Store in mind. I think that is a large part of what has made the App Store so successful. It engenders an environment of trust and comfort with customers where they are willing to try and experiment with new purchases at a level never before seen. I would hate for people to feel burned by trying an app and then turning cold to apps in general.

On a more personal level it also worries me that this is drawing away money from the rest of the eco-system. I sincerely hope that I can avoid having to make my income from apps built upon inventing more and more subtle methods of coercion. I prefer my business to be straightforward and transparent.

I don’t expect this trend to slacken on its own. If there is going to be a movement away from it I think it would require Apple to begin to provide limits and inducements away from these tactics. I don’t have all the answers about how best to do that but I have two suggestions for what might help add transparency and honesty to consumable In-App Purchases.

The obvious place to begin an honest conversation with customers about the true cost of “Free” apps would be in the App Store itself. Recently Apple added a notation to all apps that use In-App Purchase. I suspect the intention of this text was to help customers understand that when they download a “Free” app it may not actually be free under typical use. I would like to see this further extended to also include an indication of the typical cost to a typical user. Something like the median revenue per customer would probably work well here.

While I would love to see this actual dollar amount shown, my gut says that would be too specific and potentially confusing. Instead, I’d recommend following the cost indication style used in most travel guides. With a one-two-or-three dollar sign marker showing the effective cost of the app. Maybe with tiers like $ = $0-5, \(** = $5-20, **\)$ = $20+. 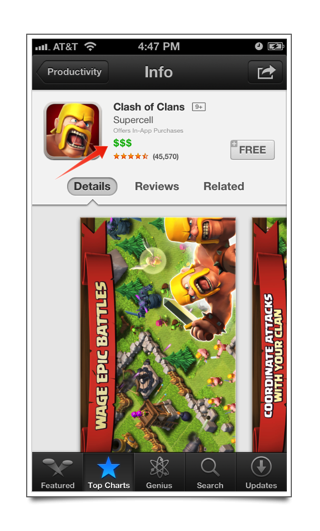 Much of the success of consumable In-App Purchase is that each individual purchase is small and feels less significant. The goal is to nickel-and-dime users in such a way that they don’t realize the actual level of their expense until they get their iTunes bill. This disconnect is extremely valuable for generating revenue but is ripe for creating a sense of regret in customers. To be more honest and transparent with customers about their “investment” into an app I’d suggest showing the cumulative money they have spent in an app on the system In-App Purchase screen.

Showing the real cost of an app to users right in the purchase screen would allow them to make a more informed decision about their purchase. 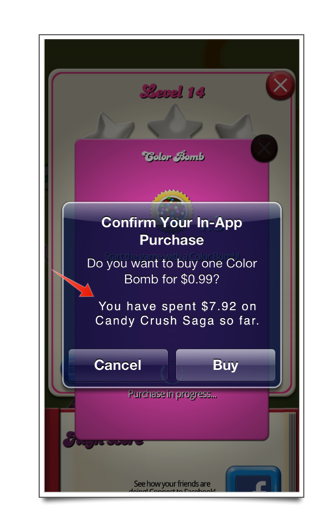 I think the combination of these two changes in the In-App Purchase system would make it more honest and clear for customers. They may reduce the volume of In-App Purchases but if a business can’t survive in an honest environment perhaps it isn’t all that great in the first place.

Update: If you think this is a good idea and would like to duplicate this suggestion to Apple please duplicate rdar://14524085 (OpenRadar)