On November 10, 2011 Apple released the iOS 5.0.1 update. This was the first time Apple made use of an Over-the-Air (OTA) update for iOS. On March 7, Apple released their second OTA, iOS 5.1. This includes incremental updates to iOS along with Siri support for Japanese. OTA updates are significant for developers because they dramatically increase the pace at which users update their devices. This allows us to more quickly drop support for old versions and more rapidly embrace the new features provided by the latest OS.

This post will present data showing how quickly users are updating to iOS 5.1. The data below is taken from the user base of my Audiobooks apps. Audiobooks is universal so provides data for both iPhone and iPad. The free and paid versions of Audiobooks together get around 100k weekly downloads so provides a statistically meaningful data set. This data reflects the active unique users each day across all devices.

Bookmark this page or follow me on Twitter if you are curious to see the data progress over time. I’ll be updating this page periodically until the numbers seem to stabilize.

Upgrades appear to have leveled off into the slow trickle phase. After the initial surge of upgrades (both OTA and otherwise) user adoption has transitioned into a more measured pace. Overall there is still a clear movement towards the newer OS variants. 82% of all users are now running some flavor of iOS 5.x.

As the overall numbers don’t show a lot of movement I was curious which platforms were ‘pulling’ down on the update pace. I ran the numbers for April 15 splitting the OS data between iPhone, iPod touch and iPad devices. This data showed a clear pattern. The iPhone and iPad show nearly identical stats with roughly 85% of users on iOS 5.x. The iPod touch is the laggard of the group with only 66% of users on iOS 5.x. This only has a limited effect on the overall numbers because the iPod touch represents only 14% of my user base (iPhone is 49%, iPad is 37%).

The numbers have finally hit the point where I am now planning to drop support for iOS 4 in my next major updates.

#### Wednesday, March 21, 2012 The iPad 3 launched on Friday, March 16. So I was expecting a huge swell in 5.1 adoption given all the new devices, from what I see in the data it looks more like a minor bump in adoption dwarfed by the overall rate.

The current adoption rate hits a significant milestone. It took iOS just 15 days to get the same percentage of users on the latest OS version as are currently on any single version of Android.

According to Google’s Platform Versions site the most widely used Android version is API Level 10 Gingerbread which currently has 61.5% of users. This was released in mid-2011. 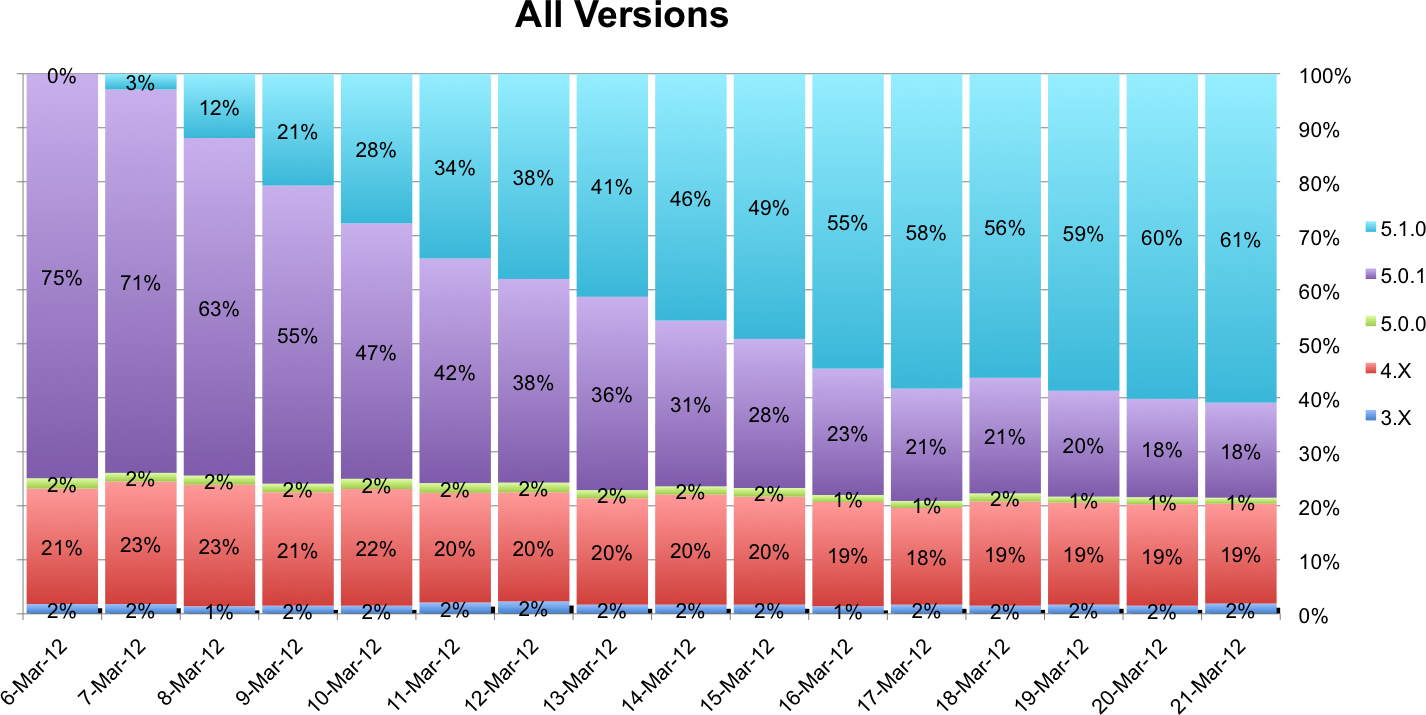 Looking just at the OTA eligible users we again see a promising future for iOS developers. Nearly 80% of users are on the latest version within 15 days.

The first checkpoint that I thought interesting to note was when the upgrade rate for OTA update eligible users (i.e. users running iOS 5.0 or greater) hit around 50%. This milestone occurred on March 12, or 5 days after the update was released. It hits this point a few hours later than 5.0.1 did, but the general pace seems pretty consistent between the two releases.

If that pace keeps up (very likely given the flood of 5.1 iPads arriving on Friday) we should see a near total adoption of 5.1 for OTA update eligible users sometime in the first week or two of April. 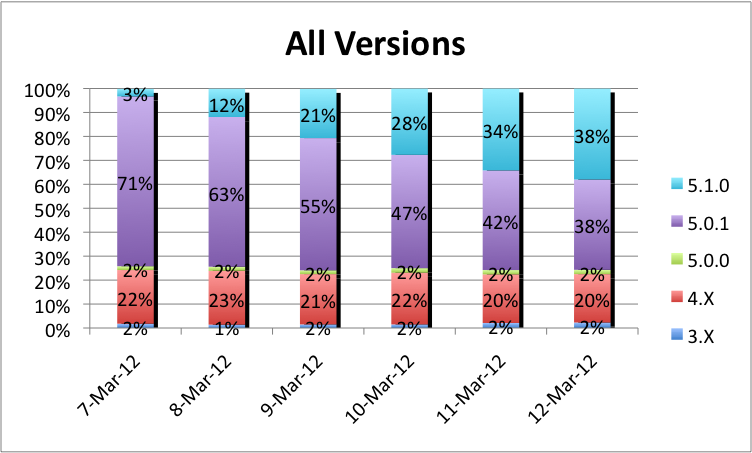 It would be easy to point a finger at Android and remark on how different this picture (38% of users running the latest iOS version in 5 days) is to the fragmentation we see on Android devices. That isn’t really constructive since the amazing upgrade pace we see above is a result of users being given the opportunity to upgrade and then acting on it. Most users of Android simply don’t have that opportunity. While that doesn’t make things any better for the poor developers who try to support the various flavors of Android it isn’t really an apples-to-apples comparison. However, it does reinforce my near complete focus on developing for Apple’s platforms.