I think that the next chapter in the history of the MacBook is getting ready to start. A number of movements seem to be coinciding into what would make for a radical departure from the current lineup. I’m just guessing here, but I think if you put it all together the result is a very sweet machine.

Any discussion of the future of the MacBook should probably start with a review of the October, 2010 Apple special event. This was the “Back To The Mac” event that brought the focus back towards the Mac after the success of the iPad and iPhone. It was at this event where Steve Jobs introduced the current form factor for the MacBook Air.

Steve started off by saying that there were six virtues that the iPad possessed that would be great to bring forward into the MacBook.

These served as rubric for designing the new Air. The new MacBook Airs announced that day had all of these characteristics in spades. The bump they got in July, 2011 added further to this by bringing the performance of the Air dramatically forward from the older Core 2 Duo processors to the new Core i5 & i7.

That serves as a helpful backdrop, but what was most telling to me was how candid Steve was about what he saw as the future of the laptop market.

“We see these as really the next generation of MacBooks. We think all notebooks will be like this one day.” — Steve Jobs [1:20:25]

I think that day may be coming soon. Probably next Spring.

For the longest time if you asked me what the “Flagship” MacBook was I would have said the 15” MacBook Pro. For as long as I can remember it was the perfect combination of power, price, and utility. Spend 5 minutes on Apple’s website now, and you’ll get a very different impression. The MacBook Air is clearly the new “Flagship”. It is the lead graphic on every page talking about Macs. It is in all the screenshots for OS X Lion. Everywhere you look, it is MacBook Air. In fact the only place I was able to find the MacBook Pro is on its own product page.

I’m not the first to speculate about a 15” MacBook Air coming out next year, but what I hope to do is put a few more handles on what that might mean.

A 15” display in a laptop provides optimal balance between utility and portability. It fits comfortably in a shoulder bag, is almost usable on an airline tray, and is generally light enough to schlep around all day. Its 17” big brother has always served a very niche role as a more of a desktop replacement for specialized pros. The smaller laptops are much get a boost in terms of portability but tend to be hampered in terms of utility. Even though the 13” MacBook Air has the same resolution as a base 15” MacBook Pro those pixels are dense to a point that many screen elements become uncomfortably small. This is further seen in the 11”. Furthermore, the 15” laptops have tended to find that sweet-spot in terms of CPU power.

So if 15” laptops are sweet-spot in terms of utility and portability and MacBook Airs are the “next generation of MacBooks” – a 15” variant of the Air can’t be far away.

Right now there are 3 reasons that I could see for someone choosing to get a 15” Mac Book Pro over a MacBook Air:

The second and third of those objections I think will be ignored by Apple. They have shown a consistent desire to drop old and dying technologies as soon as possible. If anything I think that Apple is throwing a lifeline in this regard by their speedy rollout of Thunderbolt, which allows users to add on needed hardware with minimal performance degradation. The movement towards iCloud for storage of entertainment media, further drives out the need for traditional hard drives.

The first of those objections is more interesting. The current crop of MacBook Pros have GeekBench scores ranging between 6,096 - 10,806, or 9,281 - 10,806 if only the 15” models are considered. The best MacBook Air right now only comes in at 5,786. Now, this performance gap is made up for in typical use by the SSDs that all MacBook Airs use. However, for demanding users this still presents a problem. Intel’s next generation processors, codename Ivy Bridge, should help tremendously in this area since they have dramatically better power/heat performance than current Sandy Bridge chips. An Air may never have a fastest chip possible but we are hitting a point where they will be “fast-enough” for almost everybody.

Along with the introduction of Lion, Apple has made clear that their philosophy for high-resolution displays has shifted to match the way they did it for the iPhone. The iPhone’s Retina display is exactly 2X the resolution of the preceding models. Those extra pixels, however, are not used to make screen controls smaller instead they allow for incredible detail and sharpness in equally sized components. Reading text on an iPhone 4S is almost as crisp as in a printed magazine.

But will Apple be able to field a laptop screen capable of such a high pixel density? For comparison, there is a chart showing the current landscape of Apple screens for iPhone, iPad and MacBooks to scale (click through to see at 1:1 pixel resolution): 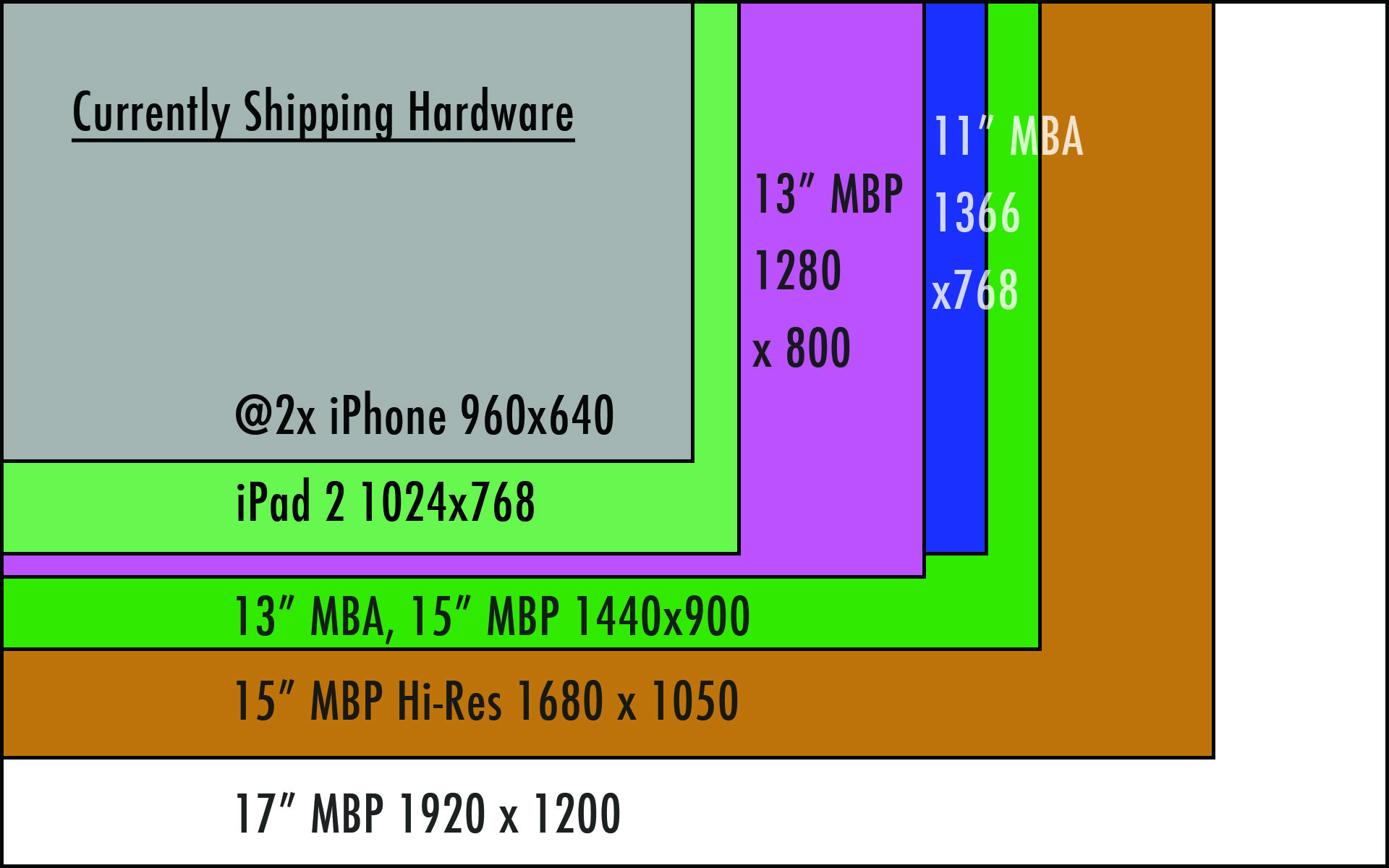 Perhaps most interesting to note is how similar the resolutions of the iPad 2 and existing MacBook Airs are. While substantially wider, they are very close in height.

There is wide speculation and expectation that the next generation iPad will include a Retina screen, bumping its resolution from 1024x758 to 2048x1536. While I don’t know all the ins-and-outs of screen manufacture, this seems reasonable given Moore’s Law and the 22 months since the original iPad introduction. Also, the quality of the sources speculating on this display give the rumor more weight in my books.

The real question, however, is whether Apple can do it for a laptop as well. I did a similar graph for what pixel doubled versions of all the current screens would look like (again, click through to see at 1:1): 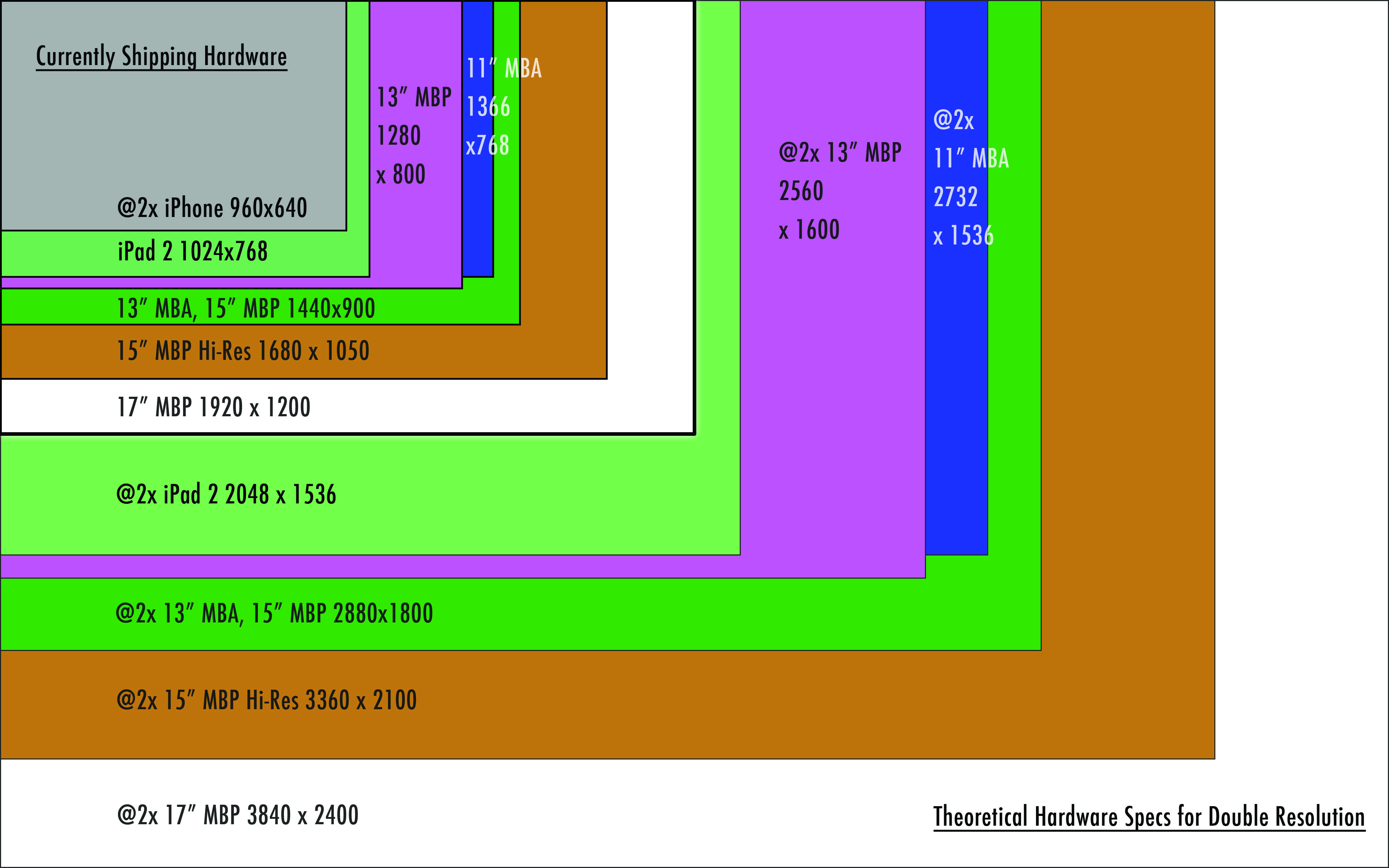 When I consider that graphic, I’m struck by how big the difference is between a Retina and traditional laptop screen. It looks like a double resolution version of a 17” MacBook Pro would seem almost absurd. That device would have 2.25X the pixels found in the Apple Thunderbolt Display. However, if Apple can field a Retina version of the iPad, my gut says that they could do the same thing for a resolutions comparable to the 11” and 13” current Airs (Dark Blue and Green in that diagram).

The advantages of a Hi-DPI version of the MacBook Air are immense. Firstly, it would differentiate Apple notebooks from PCs in a visible and tangible way. Once you spend any amount of time with the iPhone’s Retina screen you quickly find other displays looking blocky and rough. Text looks almost painfully sharp, so reading becomes just less straining. Plus, it allows you to fit more detail into a screen without having to make things smaller, so you don’t hurt accessibility.

While writing this I started wondering if Apple would entirely discontinue the current form factor MacBook Pro when it ships larger versions of the Air. My final conclusion is that I’d make a large wager that the 13” Pro is dead, a small wager the 15” Pro is dead, and expect the 17” to remain unaffected. I’d see the 17” as the bridge extended to help ease the transition. It would continue to be priced so that it is only really for pro users and include just about everything including the kitchen sink, making it more like the Mac Pro.

That would yield a streamlined offering that is easy to understand. Apple has typically thrived in making purchasing decisions simple for customers. They did it with the iPod, where there is a product at almost any price-tag, so your decision becomes simply “How much can I afford”, not “Which is better”. The current overlap between the 13” & 15” MacBook Pros and the Airs seems to create confusion in the lineup.