On November 10, 2011 Apple released the iOS 5.0.1 update. This is significant because this was the first time Apple has ever made public use of Over-the-Air (OTA) updates for iOS. Over-the-Air updates are done without the need to tether the device to another computer.

As a developer I’ve been very excited about OTA updates since they were first announced at WWDC because in theory they will allow developers to more quickly drop support for older OS versions. The hopes goes something like “If you make updating trivial and automatic, more users will do it.”

After examining the first 5 days of OTA update data for my own apps I’m happy to report that it appears customers love using OTA updates. In the first 4 days since the update was released I’ve seen upgrade rates of around 50%. That is pretty unheard of for a minor update. 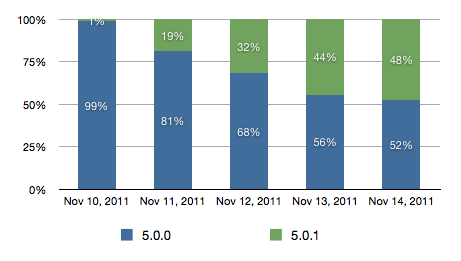 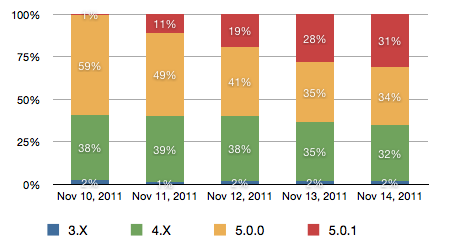 Percent of all users by iOS version. Note, only users running iOS 5.0 could make use of OTA updates.

The data I present above is from my recipe management app, My Recipe Book. I chose this dataset because this app serves a demographic that generally seems more ‘mainstream’ than some of my other apps. So it should be representative of common users, not just techies.

[Updated] For comparison purposes I dug out the data from the last minor update prior to iOS 5. This was for 4.3.5 back in July. Over the same period only 21% of users overall had upgraded. It appears that most of those updates were from older versions rather than from 4.3.4. 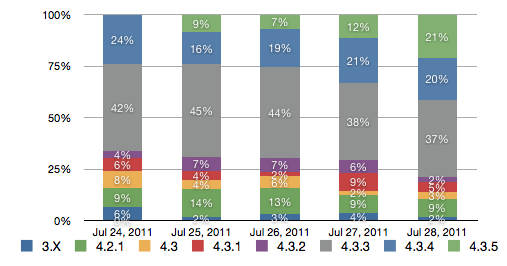 [Updated] Looking at the update rate after around two weeks things seem to start leveling out at the 90% mark. Dropping the install base of the other OS to small enough level where supporting them may not be necessary. Once the majority of iOS users are running 5.x, I suspect developers will be able to stop worrying about backwards compatibility or at least drop support very, very quickly.